I didn’t like numbers at all growing up. Math was my least favorite subject and science was a close second.

But, inevitably, the older I got, the more I valued the two subjects. In fact, nowadays, every decision I make is influenced by numbers. For example, I only buy plane tickets on Sundays and fly on Tuesdays. (Thanks, science!)

With this in mind, it wasn’t a surprise to me to learn that top sales reps use data to drive their strategies and choices. What was surprising is how many aren’t taking advantage of the scores of freely available data at their fingertips.

Do you feel that your sales strategy could benefit from an injection of data? If so, it’s your lucky day. Here are four prospecting tips, backed by data.

The average buyer receives over 100 emails a day, opens just 23% and clicks on just 2% of those emails, according to Tellwise. With those odds, it’s going to take a lot to make an impact on a prospect.

Here’s how to use these statistics to your advantage in the context of a sales outreach campaign.

Step 1: Write the copy, and save it as a canned response.

By utilizing canned responses, salespeople can easily personalize their emails before sending. With templates built, reps can then tailor a few key areas to improve the chances the prospect will open and respond. (Psst: Here’s how to create a canned response in Gmail.)

For instance, include something personal in each email, such as the buyer’s name. Personalized emails improve clickthrough rates by 14%, and conversion rates by as much as 10%, the Aberdeen Group found. In addition, Retention Science found that subject lines with the recipient’s first name also have higher open rates.

Instead of having to save all of these emails as drafts in my inbox and do a major email dump on Tuesday morning, I use sales automation to schedule them to go out at the right time. It’s an easy way to wrap up the day and not have to worry about sending 100 emails when I get to the office.

I now have personalized emails set to arrive in my prospects’ inbox at 8am on Tuesday morning, improving the chances these prospects open and read what I’ve sent.

Here’s a reality check: 90% of companies report they will only buy from organizations they trust.

We enter the world hardwired for social connections, and we’re more likely to trust someone who is similar to us in some dimension. That’s why establishing a connection is so important.

Establishing a connection starts with doing the research. Find your buyers on LinkedIn, Twitter, and any industry-specific social groups well before you reach out so you get a general idea of who you’re emailing.

I spoke with two top salespeople last week who identified these three things to look for:

All of this information and more is readily available on buyers’ profiles. And these tidbits provide an easy way to start a conversation. 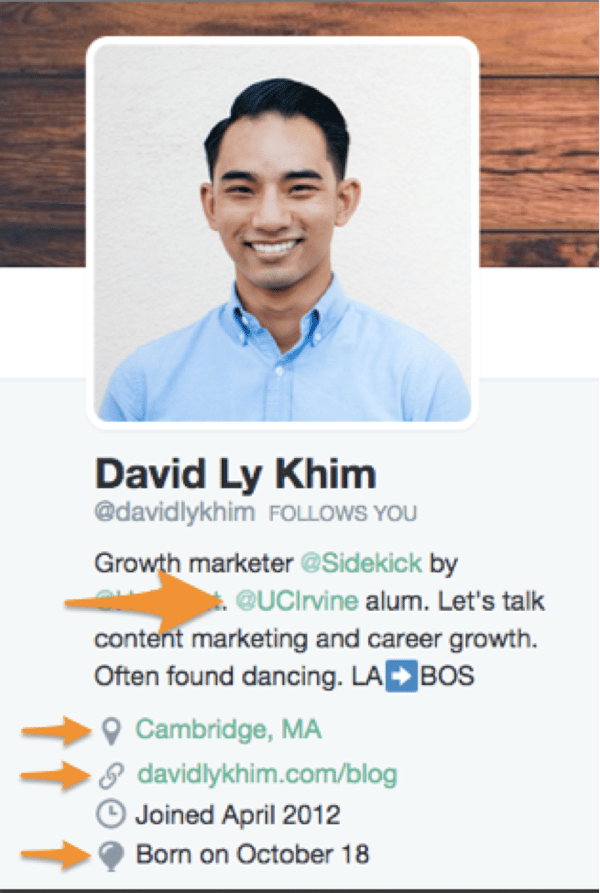 Ninety-five percent of buyers chose a solution from a company that “provided them with ample content to help navigate through each stage of the buying process,” DemandGen Report discovered in a study.

As a content marketer, I’m a little biased here. But I do believe having ample content is important to the sales process.

In terms of using content in sales, the most important thing to remember is to gather and disseminate story-driven content. Having story-driven blog posts, infographics, and testimonials at the ready to prove your product’s results is huge. Dan and Chip Heath found that 63% of sales presentation attendees remember stories, but only 5% remember statistics.

By sending along relevant client case studies, prospects can discover for themselves how a customer went from problem to results with the right product.

Salespeople quit too quickly. Forty-four percent give up after one follow-up, according to Scripted.

Unfortunately, humans are wired to look for immediate results when we take on a new task. Whether it’s getting in shape, saving money, or making prospecting calls, we want to see progress right away.

In the likely event we don’t hear back from a prospect immediately, the key is to send a follow up note. The data says:

There’s only one step to staying persistent, and that’s following up! Track where each prospect is in the funnel, and stick to a consistent follow up cadence. Keep a schedule of when the next email or call should go out so valuable prospects don’t slip through the cracks.

What was once considered a career about technique and style has become data- and science-driven. Taking someone from a prospect to a customer is a skill that can be taught, learned, and iterated.

Editor’s note: This post was originally published in October 2015 and has been updated for comprehensiveness.

10 Business Resolutions for Salespeople in 2022

The Keys to Building and Sustaining a Recession-Proof Business