People often conflate higher costs with higher quality. The two concepts seem intrinsically linked. We have a natural inclination to believe, “Well, that company must be charging that much for that product for a reason.”

That mentality — that instinct that often leads us to believe expensive means better — is the basis for a pricing strategy known as prestige pricing. It’s a tactic businesses leverage to shape premium brand perception by charging premium prices.

Here, we’ll review the strategy in-depth, touch on what it takes to leverage it, and look at some prominent examples of the technique in practice.

A prestige pricing strategy is often closely tied to brand perception. Companies that take this approach often have products that are recognized for their superior quality or the value they add to the lives of customers.

The pricing method is based on the assumption that consumers perceive more value at higher prices — that expensive products are priced that way for a valid reason. Prestige pricing strategies can vary depending on a company’s goals for its brand and offerings.

If you want to implement one yourself, you’ll want to look at competitors in your market to see how they price products that are similar to yours. With a unique value proposition that differentiates your product from the competition, you’ll be able to justify a higher price point.

Some high-profile companies use prestige pricing to value their products. Let’s take a look at examples of these businesses. 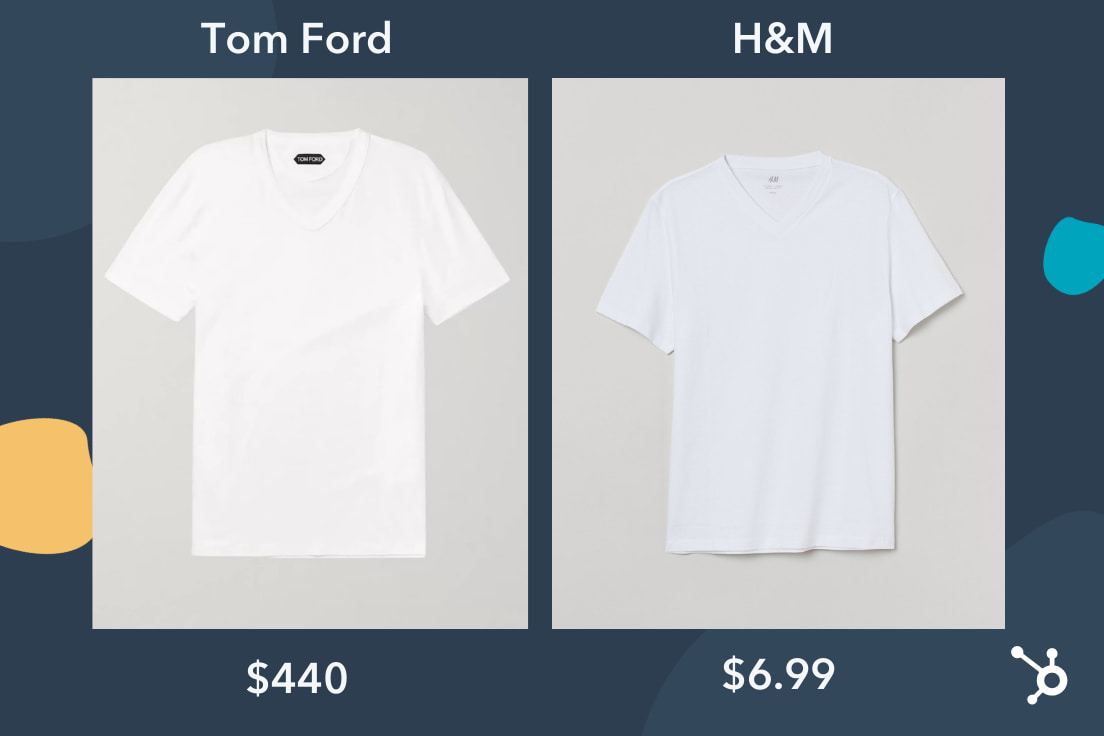 Prestige pricing has a significant presence in the fashion industry, and this example highlights that trend.

Though the Tom Ford shirt is likely much of higher quality than the H&M one, there probably isn’t enough of a difference between them to naturally warrant a $433 price discrepancy.

And at the end of the day, they’re both just white t-shirts — it’s not unreasonable to assume that most people you encounter won’t pay close enough attention to really care whether the shirt you’re wearing costs more than most people’s monthly grocery budget.

But this comparison brings to light one of the main drivers of successful prestige pricing. Consumers who are buying the $440 Tom Ford shirt aren’t buying the shirt itself so much as they’re buying the fact that they just bought a $440 white t-shirt.

It’s about status. In buying the Tom Ford shirt, consumers are demonstrating that they have the means to spend over $400 on something most people would buy for less than $20. It’s projecting an image — one defined by wealth, class, and prestige. 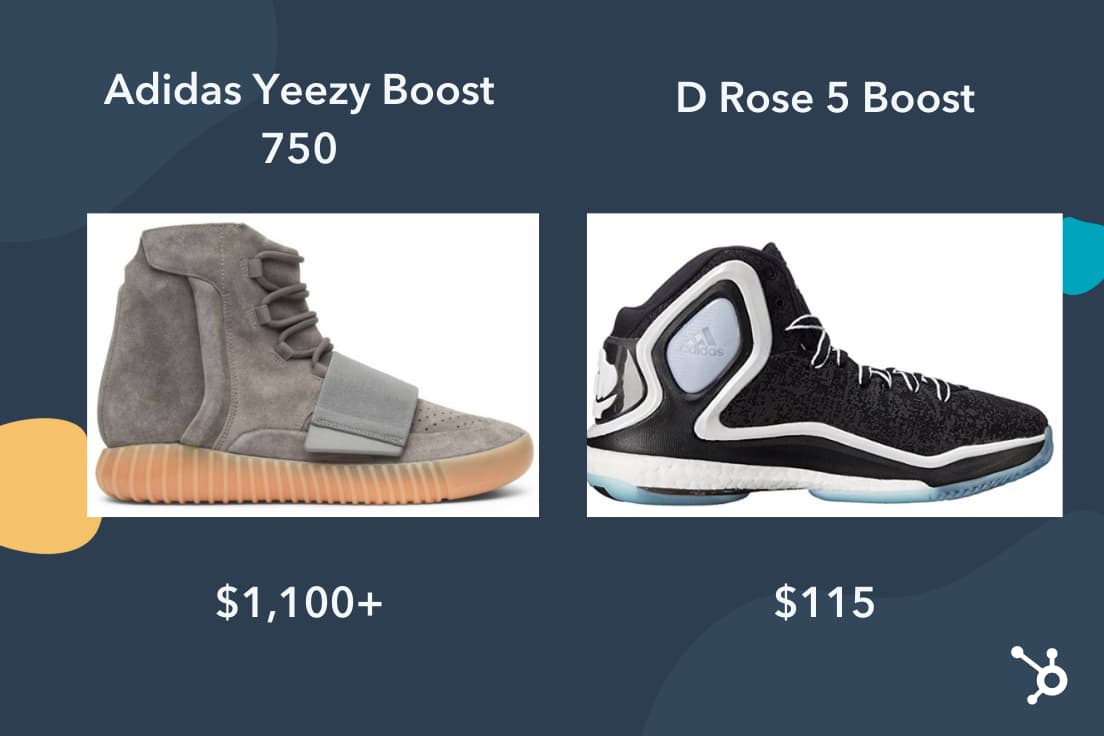 This example is a case study in how limiting the supply of a product can enable successful prestige pricing. According to research from Soloreview, the Yeezy Boost 750 cost roughly $76 to produce — compared to $43 to produce the D-Rose 5 Boost. And yet, that $33 difference in production cost doesn’t reflect the gap between how much a new pair of each shoe sells for today. That’s a discrepancy of (at least) $985.

So how do you account for that price difference? Well, the Yeezy Boost 750s were released in a much more limited supply than the D Rose 5s. The former were rolled out via drops with fixed numbers of pairs available — with the first batch selling out in less than one minute. The D Rose 5s, on the other hand, were mass-produced.

Though the difference in production costs between the two isn’t staggering, the difference in allure and exclusivity is. Resellers can charge prestige prices for the Yeezy 750 Boosts because their supply is scarce and, in turn, of higher perceived value. 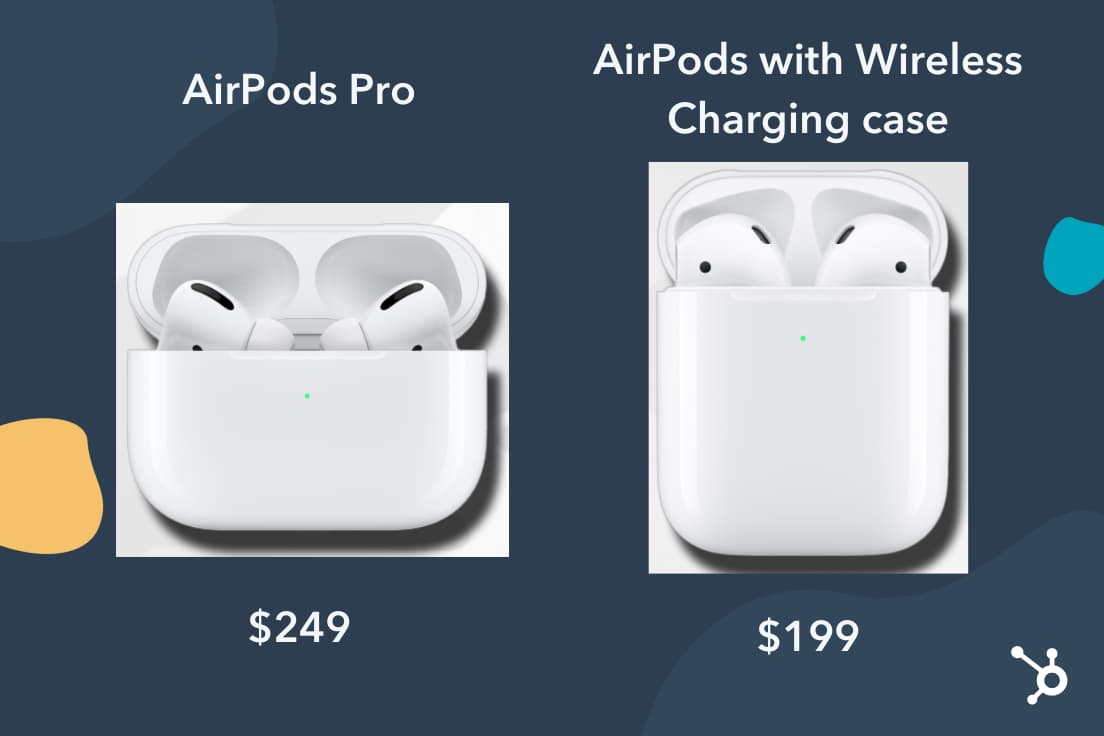 Here, we have an example of a company leveraging prestige pricing to create the impression of superior product quality among its own products. In an interview with Fortune, Wedbush analyst Dan Ives estimated that a pair of standard Apple AirPods with a wired charging case — priced at $159 — had a manufacturing cost of $59 to $69 per unit.

While the AirPods Pro have additional features, it’s hard to imagine that those bells and whistles account for an additional $100 in production costs — or the difference between each model’s respective price tag.

And yet, Apple charges at that markup — leveraging prestige pricing to create perceived value. It’s affirming consumers’ perception that they’re getting a premium product by offering it at a premium price point. 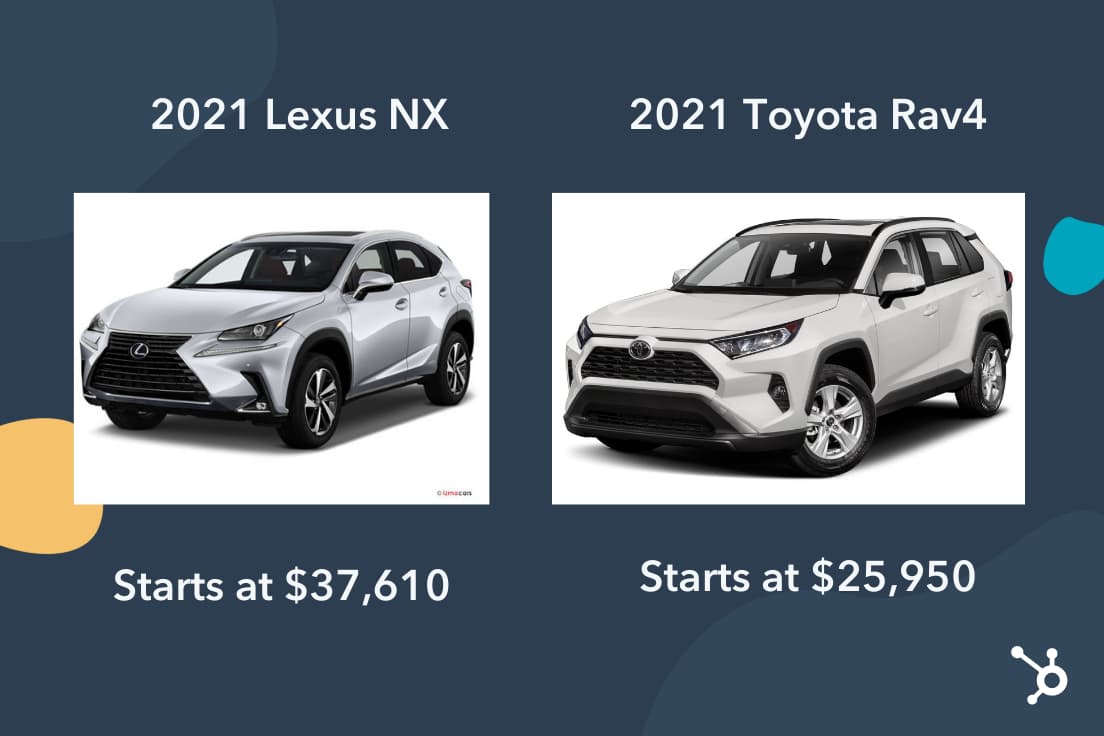 Compared to the NX the Rav4 has a better fuel economy, is similarly sized, has more cargo space, has a similar dashboard touchscreen, and is just as safe. All in all, the two cars are fundamentally similar when compared objectively — so it might seem hard to account for an over $10,000 gap in starting price between the two.

But that comparison falls through when you consider their respective target markets. The Lexus NX is a luxury vehicle, and its built-in features and price reflect that.

Though the baseline experience of driving each car might be similar — both get you from point A to point B comfortably — the prospect of owning the Lexus has a certain appeal that registers with high-end buyers. In turn, the brand has the flexibility to charge a prestige price for the car. 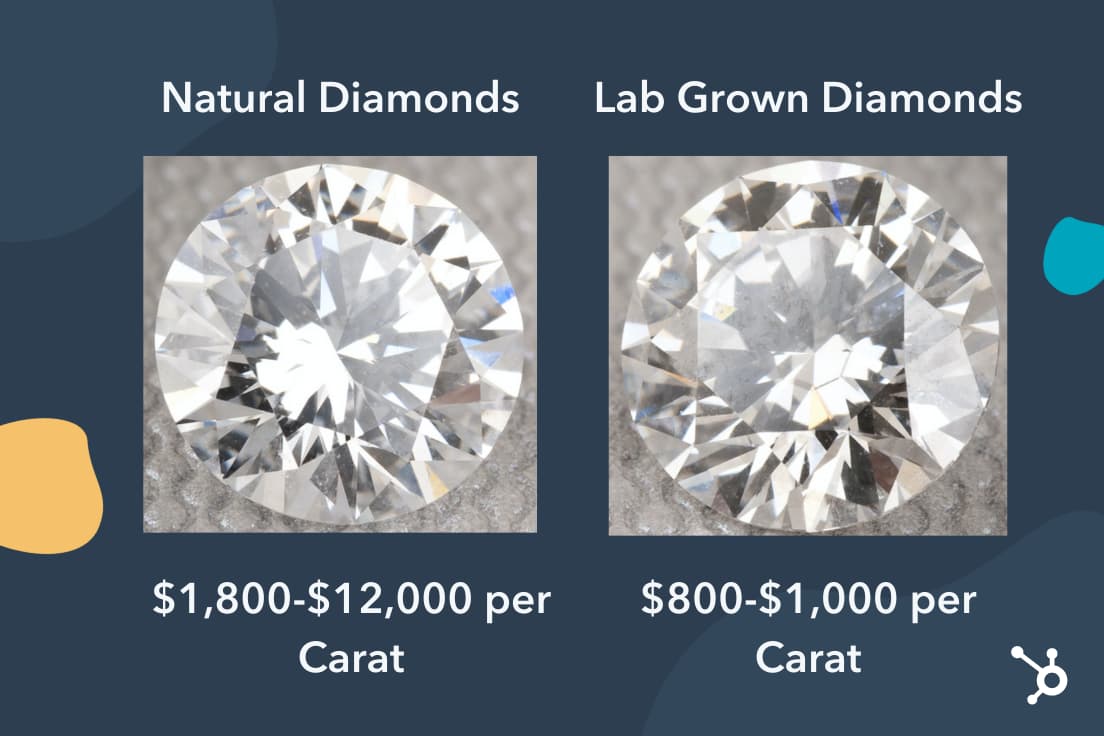 One of the most prominent examples of prestige pricing comes from the diamond trade. There are two kinds of diamonds — natural and lab grown. As you can assume, natural diamonds occur naturally. They’re the ones that are mined, with an ultimately fixed supply.

Lab grown diamonds are synthetic. They’re manufactured in labs via chemical reactions that I won’t even pretend to understand. But in this context, the term “synthetic” doesn’t necessarily mean artificial. They actually have the exact same crystal structure and chemical composition as natural diamonds.

They’re virtually indistinguishable from one another. Seriously, in the image above, I genuinely don’t know whether those labels are accurate. The one on the left might be lab grown, and the other could be natural. Even a seasoned jeweler would have trouble identifying which one is which.

But even though they might be the same in chemical composition and appearance, there’s an extreme gap in value between the two. Why is that? Because diamond retailers say so, and the market agrees.

Diamond sellers use prestige pricing when it comes to natural diamonds. They create the impression of higher quality, scarcity, and status affirmation by pricing those kinds of diamonds a cut above their lab grown counterparts. Though natural and lab grown diamonds are identical in chemistry, they differ in public perception — a byproduct of charging a premium rate.

Prestige pricing has a place in a wide variety of industries. Plenty of companies bill themselves as the premier options in their space by charging a higher rate for their products or services. And while those prices don’t always reflect the actual value of the goods in question, they play on one of the core tenets of economics — a product is worth whatever people are willing to pay for it.

Editor’s note: This post was originally published in February 2019 and has been updated for comprehensiveness.

Multi-Threading Deals: How to Give Your Enterprise Team What They Need