Megan Fairchild is a principal dancer with New York City Ballet who can pivot precisely on the point of her toe like a music box fairy. To the layman, she makes it look effortless as she twirls delicately around on a pin point, flourishing her arms and hands.

But in fact, a pivot turn, or pirouette as ballet masters call them, is a series of steps so fluidly performed as to appear as a single, elegant motion. Fairchild starts in fourth position, making sure that she’s balanced and stable. She bends her knees in a plié, pushes off, turns in an arabesque position and finishes elegantly like a butterfly landing on a leaf.

Digital marketing is like a pirouette. Those who get it right appear to twirl effortlessly, disrupting their market, dethroning incumbents, and becoming principals in their trade.

The Four Stages of a Digital Pivot

The four stages of a digital pivot are like the four steps of a pirouette. But just as the young dancer who rushes onto stage eager to spin in her very first pair of toe shoes only to come tumbling down, most companies pull back the curtain on their website before it’s ready to convert visitors into prospects. Just as the pivot turn is a series of individual steps performed in sequence, so is a digital pivot. The steps build on each other.

A sequential approach to the digital pivot brings owned, shared, earned, and paid media together into something that is greater than the sum of its parts.

The fastest way to generate returns is by putting these four steps together, in this order: 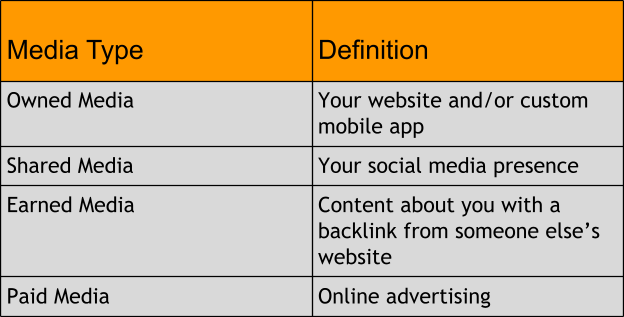 These are the four steps of the digital pivot.

Whoever controls the layout, controls the payout. If you don’t control the user experience, you can’t control the customer experience. The proximity of your online content to the transactions you seek to make directly impacts the probability of conversion. If you can’t experiment with the layout of the page, you can’t optimize for conversions. And you can’t change the layout of the page on Amazon, Yelp, or Linkedin. That’s why in a digital pivot, web pages precede social media posts. Get the content on your own website right first.

But obviously, you can’t calibrate content without a website because that’s where you convert leads and drive revenue. On your own website, you can insert forms to collect lead information or transact e-commerce. You can’t do that on someone else’s website. At least not without sharing your profits.

When you have conversations on social networks with online influencers, you do so in front of their followers, which widens your reach. The important thing to understand is that on social media, reach is a factor of engagement. Unless people like, comment, and share what you have to say, no one sees it.

So pushing off is about figuring out where your customers are most active online and who they trust so you can find your axis.

The fastest way to build an online following is by winning the respect of the existing influencers in your space. An engaged community of followers is social proof that others endorse what you have to say.

The spin is the most glorious stage of the pivot. It’s where you puff out your chest, raise up your arms, and earn the admiration of your customers and industry. The harder the website is to get published on, the more glorious the admiration. When you pitch an editor to publish a guest post on their website, you should include links to articles you’ve written on your own website. If you can’t demonstrate your ability to articulate ideas and construct cogent arguments on your own website, why should they believe you can do so on a much larger stage?

Rather than regurgitate what everyone else is saying, the idea is to take a thought leadership position on timely, important ideas. The news media and popular blogs exist to publish new ways of thinking. So it’s always easier for thought leaders to earn media coverage. The objective is to establish yourself as a thought leader, rather than a thought repeater. 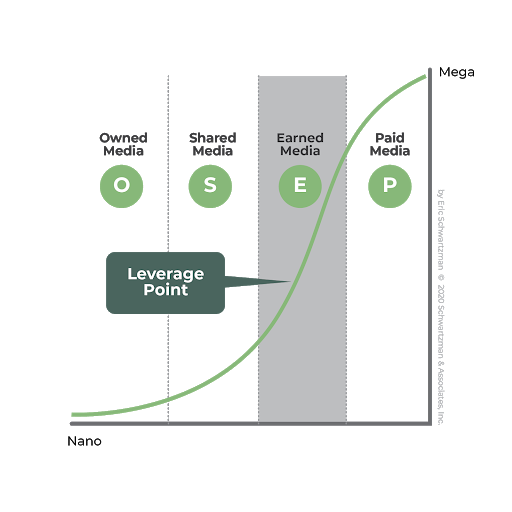 Now that your owned, shared, and earned media programs are operational, and you’re driving revenue organically, you’re ready to land into advertising. You’ve figured out how to attract and convert customers online, and you’ve optimized the path to purchase.

Depending on your line of business, the last stage of a pivot is the landing. By now, you’ve proven your ability to generate leads and commerce. You know what percentage of visitors convert into leads, what percentage of leads becomes customers, and how much the average customer spends.

Now, as long as you can generate more revenue than it costs to acquire a customer, you’re ready to scale through advertising. You forecast revenues by multiplying your conversion rate by your traffic counts. If you know that half of all leads request a proposal, and a quarter of all proposals result in a sale, you can figure out how much traffic you need to hit your numbers. Paid media is the last step of the digital pivot because you don’t want to drive traffic until you’re prepared to profit from it.

There is, however, one exception. Dancers practice pirouettes without actually turning. They just balance for two counts and rehearse coming down gently as a sort of exercise. If you don’t have the time to build traffic organically, you can use paid media to accelerate the testing process.

Seems like a lot of work, doesn’t it? I’m not going to lie to you. It is. But so is outbound sales, so in many ways digital marketing is about reallocating resources from outbound to inbound. Considering the trajectory of nearly all business these days, do you really have any choice?

Edited excerpt from The Digital Pivot: Secrets of Online Marketing by Eric Schwartzman, a Los Angeles based digital marketing consultant.

How to Use AI to Bolster Your Customer Journey

How SaaS B2B Companies Can Win at Customer Retention