In March of this year, Jay Baer, Founder and CEO of Convince and Convert, assembled his entire virtual team to announce an unexpected departure from our very successful strategy and consulting business. With the prospect of a pandemic, the business of public speaking was in jeopardy for the foreseeable future. Jay repurposed and repackaged our entire offering. 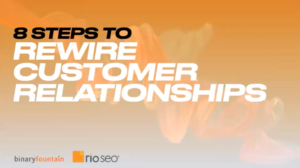 In a recent live broadcast, 8 Steps to Rewire Customer Relationships, Jay recounts his observations and rationale for such a shift in strategy. Here he is in his own words:

“The first thing to do is to reconfigure your products and services. Do we offer something fundamentally different? Once you’ve done that, once you’ve reconfigured, then it’s time to Repackage Products and Services. So, alight, we know what we’re going sell now, maybe that different or substantially different than what we sold before, now how can we make it easier to buy from us given the circumstances the world is in right now. And we spend a lot of time in my own organization Convince and Convert doing just that.”

Historically, what we sell on the consulting side is very custom strategic plans (60-90 days to create) that provide a tremendous amount of guidance and detail to large corporate clients on how they should improve their social media, their content marketing, etc. It’s not an easy thing to buy, and it’s not an easy thing to deliver, nor was it intended to be. But our observation was we’re going have to repackage this because the plans we sold are intended to look at an 18-24-month time horizon. These are the things that you should do over the next two years, Mrs. or Mr. Client.

Nobody knows what is going to happen in two years. Nobody wants to buy a two-year strategic plan right now. Two years is a long time in the current state of affairs. So we completely structured our offering, cut the price (because we cut the scope) and decided we’re going to sell  “Quick Wins.” It’s the same kind of strategic thinking we have always sold, but, instead of saying “here’s what you should do over the next 24 months,” we pivoted to “here’s what you should do over the next four months.” We deliver this in 30 days, instead of the 60-90 days.

It’s been really successful. It’s helped our business very much during this uncertain time for consultants and strategists.

It’s frustrating to me when I see companies not making it easier to be than ever right now. They’re still throwing up foolish obstacles in the way of their customers; things like, well, you can’t return it if you don’t like it, or the price isn’t any different than it was before, or any number of other circumstances.

You have to understand your customers may be unlikely, for obvious financial reasons, to transact the way they did before. I saw a stat just yesterday, it was a survey of chief marketing officers of large companies, that 42% of customers refuse or are unwilling to pay full price since the pandemic. Maybe they can’t, they don’t have a job or they’ve been furloughed, but 4 out of 10 customers can’t pay full price.

I’m not suggesting this is just about discounts—that’s not the point here—the point is you have to find a way to make it easier than ever to buy from you.

“I bought an outdoor couch a couple of weeks ago. We’re trying to spend more time outdoors since we’re not going anywhere on an airplane.

This really neat start-up company makes cool outdoor furniture built for the weather, even in a place like Indiana which is not really known for great weather, but this couch was pretty expensive. I don’t know, it seemed like a lot for a couch, but I had it in my shopping cart, I didn’t transact, they sent me an email—cart abandonment (always a nice idea)—which said, ‘Jay, we want to remind you that we have a 365-day return policy.’ And I was like, ‘Dang.’

So you’re telling me I can sit on this couch for a year? And then be like, ‘Nah bro, I’m not into the couch.’ There’s a minor restocking fee which makes sense, it’s a whole couch, and that’s it.

OK. Boom. Checked out, take my money. I don’t know if that was the policy pre-pandemic, but that’s the kind of thing I’m talking about.

Here’s the Rest of the Story

Jay’s foresight and seemingly drastic plan to switch paths on deliverables was pure genius. Perhaps blatantly obvious in hindsight, but think back to early March; none of us knew much of anything about how this would disrupt business and everyday life. This pivot required agility not only to our operations but also to our clients, existing and newly acquired. Everyone still needs agility. The singular decision to retool the company deliverables, price points, and timeframe for delivery was spot-on. If you haven’t already done so, it may not be too late. This storm isn’t over.

Another direct benefit was an easier and shortened sales cycle. Previously, multi-month engagements at high price points often have to be budgeted or approved well in advance of execution. These new, smaller, more tactical, quick-turn projects were often priced within someone’s signing authority or discretionary budgets. Once one was delivered to a client, there was often a second one to follow-up.

I don’t think you’ll read this or hear it anywhere else. I heard it, the entire C&C team heard it, and we took it to heart. Jay told us that, “Our mission was to keep our clients in business. If they go out of business, we go out of business.” He told us, do whatever you can, provide Youtility, be helpful, even if we don’t charge them for our services.

Yes, he said, “…even if we don’t charge them for our services.” He quickly added, “It’d be better if we can charge them…”. He played the long game, the smart game, and the ethically sound game. That’s why he prophesized, “The next six months will likely define the next six years for your business.” At the time of this writing, we’re about six months into it.

The ‘quick wins’ approach worked, probably better than expected. As Jay stated above, it was still the type of strategic thinking clients expect from C&C, but now it was bite-sized as opposed to an entire 10-course meal spread over 18 months. The quick wins were crafted to be more easily executed with our client’s existing staff and resources, rather than, for example, building out a social media customer service team. Since the specific recommendations were to be completed in 90-120 days, that was a manageable timeframe in which immediate actions could be taken, and results shared with management.

Applying This to Your Situation

In hindsight, the formula seems obvious. You just read it, in one short article. No books to read, no training courses to attend, no MBA required. Watch Jay’s full broadcast on 8 Steps to Rewire Customer Relationships. Start there and if you have questions drop us a note. We’re happy to help, even if we don’t charge you.

The post How We Successfully Rewired Our Business During the Pandemic appeared first on Content Marketing Consulting and Social Media Strategy.

How to Make Social Advocacy Part of Your Employees’ Daily Routine

Keeping Garbage Out of Your Data So You Can Make Better Marketing Decisions With Dan McGaw From McGaw.io [AMP 223]